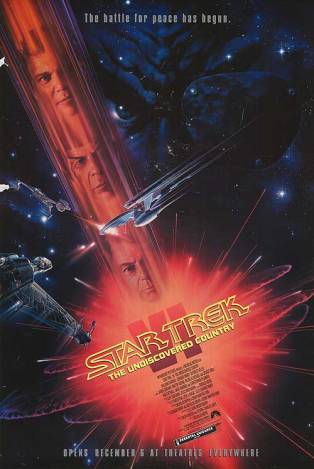 We have come to the end of an era. Star Trek VI: The Undiscovered Country is the final film in the series featuring the original cast of the television series Star Trek. Released in December of 1991 a month after the death of Gene Roddenberry, Star Trek VI manages to combine the best elements of not only Star Trek, but a murder mystery and political thriller as well. I admit now that I will probably praise this film a little too much. I will praise it because it is everything that I felt Star Trek should have been in movie form, especially with the original crew.

One of the things that I truly love about this movie is that every actor from the original cast is given the ability to shine. They all have lines that and moments that not only further the plot, but are true to their characters.

The film literally starts with a bang.

The first thing that got me after that explosion was something that I had been hoping for over the last four movies. Hikaru Sulu is the Captain of the USS Excelsior!! Now it’s not specifically Sulu being a Captain that excited me, it’s the acknowledgement by the screenwriter that these people have been serving in Starfleet for, at this point, over 20 years and none of them seemed to get promoted.  The fact is that, with the exception of Kirk who was demoted at the end of Star Trek IV, they all had been.

Chekov was a Commander and was the first officer on the Reliant before Star Trek II: The Wrath of Khan. Uhura was also a Commander. Scotty, McCoy and Spock were all Captains in rank at that time, yet they all kept serving on the Enterprise under Kirk’s command. It always bothered me that they never seemed to move on. Star Trek VI actually answers that question for me.

Back to the story. The explosion creates a wave in space that hits the Excelsior and Sulu and his crew, after turning into the wave to stabilize, attempt to determine where the explosion came from. The coordinates that they establish say that the explosion originated from the Klingon moon Praxis. Unfortunately, while they are able to establish the location of Praxis, they can no longer establish the existence of Praxis. After contacting the planet to offer assistance, they are told by the Klingon government that no assistance is necessary.

Starfleet calls a special session which includes several prominent members including Admiral Cartwright, previously seen in Star Trek IV and the senior officers of the Enterprise. 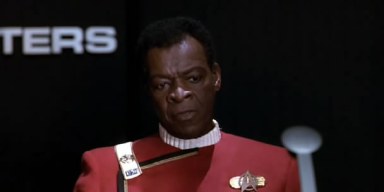 Scotty and Uhura are teaching at Starfleet Academy and Kirk is overseeing the eventual decommission of the Enterprise. The Enterprise crew wonders why they have been summoned and the C and C of Starfleet Operations introduces the special liaison to the Klingon empire, Captain Spock.

Spock explains to the stunned onlookers that Praxis, which is a moon of the Klingon homeworld Kronos, was the main energy production site for the entire empire and the explosion of the moon has decimated the planets ozone layer. The resulting pollution will leave the Klingon homeworld uninhabitable after 50 years. Spock has been in contact with the Chancellor of the Klingon government, Gorkon. (Coincidentally, David Warner, who played Gorkon was in the previous film Star Trek V: The Final Frontier as the Federation Ambassador St. John Talbot)

Gorkon has proposed an end to over 70 years of cold war hostility because his government can no longer afford to engage in war, cold or otherwise. Starfleet decides to send the Enterprise to meet with Gorkon’s ship and escort them to Earth safely. Kirk is not enthusiastic. Cartwright proposes bringing the Klingon’s to their knees and he’s not alone. After everyone leaves, Kirk and Spock are left alone in the room. Spock vouched for Kirk and volunteered the Enterprise for the mission. Kirk calls out Spock for his arrogant presumption.

The Enterprise departs spacedock with new helmsman Lt. Valeris and sets course for the rendezvous point. 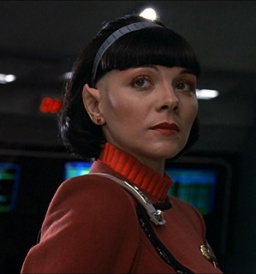 Kirk states in his personal log en route that he doesn’t trust Klingons and still blames them for the death of his son David. At the edge of the Federation/Klingon Neutral Zone, the Enterprise meets with Gorkon’s ship and Kirk invites Gorkon and his staff to join them for dinner. The initial meeting and subsequent dinner are tense to say the least.

After trading insults with the Klingon military commander General Chang and drinking a fair share of Romulan Ale, both sides depart and call it a night. As Kirk is giving his log entry for the evening and settling down to bed, he receives a call from Spock to return to the bridge. Spock tells him that they are detecting an unusual radiation surge of unknown origin. As they are watching, a photon torpedo hits the Klingon flagship. Kirk and his crew are stunned and attempt to determine where the torpedo emanated from. The sensor logs show that the Enterprise fired the torpedo as another is launched, hitting the Klingon ship and forcing it to list and internally, to lose gravity.

In the confusion, two people in Stafleet uniforms and gravity boots beam aboard the Klingon ship and make their way to the conference room, where they shoot Gorkon in the chest with a phaser. The two people escape and beam out as gravity is restored and Chang tells Kirk that they will blow the Enterprise out of the stars for attacking them. Kirk immediately signals that he will surrender and requests that he and Dr. McCoy be allowed to beam over and try to help. McCoy attempts to save the Chancellors life, but is unsuccessful. Kirk and McCoy are arrested for murder by the Klingons and the Enterprise requests instructions from Starfleet.

Starfleet command and the Federation president meet with the Ambassadors from the Klingon and Romulan governments and finally with Azetbor, Gorkon’s daughter and new Chancellor. They agree to resume the peace talks under the conditions that a neutral location is chosen and that no attempt is made to extradite or rescue Kirk and McCoy, who are going to stand trial for murder on the Klingon homeworld.

The Enterprise is ordered to return to Federation space, but they tell command that they are experiencing issues with the systems that are delaying them. Spock tells them to embellish so that he and his team and allowed the ability to monitor Kirk and McCoy and to investigate the incident. After Scotty assures Spock that there is no way that the Enterprise could have fired, due to every torpedo being physically and visually accounted for, Spock begins to speculate on what could be the cause.

Spock speculates that if the Enterprise did not fire on Gorkon’s ship then the radiation surge that they sensed could only have come from another ship. Lt. Valeris indicates a Bird of Prey and the next logical conclusion is that a cloaked Bird of Prey fired on the Klingon ship from beneath the Enterprise. Scotty points out that a Bird of Prey cannot fire while it’s cloaked and that sending this to Starfleet would just make them look desperate to exonerate the Captain. Spock agrees, but tells them to continue to investigation on the Enterprise because even if the Enterprise didn’t fire, whoever altered the databanks to make it look like they did is still on the ship along with the magnetic books they used to beam over to the Klingon ship.

During this same time, Kirk and McCoy are tried in front of the Klingons and the prosecutor, General Chang uses Kirk’s personal log as evidence against him. They are convicted, but in the interest of peace, the sentence of death is commuted and they are sentenced to life in prison on the penal colony of Rura Penthe, also known as the Aliens Graveyard. Everyone is shocked at the sentence, except Spock who assures them that he is still tracking the Captains movements.

The Enterprise crew continues to put off returning to spacedock while they investigate and search the ship. Kirk and McCoy are taken to Rura Penthe where they meet Martia, who charms Kirk and lets him know that there is a price on his head and that she needs his help to escape. He agrees and he is assigned to a mining detail that is outside of the prison grounds. Once they escape to the surface, Kirk reveals that Spock put a Veridian patch on him before he beamed over to the Klingon ship and the patch allows him to track Kirk across two sectors.

The ship enters Klingon space and heads to rescue Kirk as it is revealed that Martia was hired to have Kirk and McCoy killed while trying to escape and that the warden is involved. As the warden appears and vaporizes Martia, he begins to tell Kirk who hired him when Kirk and McCoy are beamed aboard the ship and the Enterprise heads to Federation space. Scotty finds the gravity boots and suits worn during the assassination with Klingon blood still on them. He tells Kirk and as he’s about to reveal the culprits, their bodies are found having taken phaser blasts on high stun at short-range. Spock decides to hatch a plan.

After calling over the comm for the ships JAG officer to take custody from the dead Ensigns, the assassin enters sickbay. Spock and Kirk discover that the assassin is Lt. Valeris. She is taken into custody and taken to the bridge where they press her for information regarding who is involved in the conspiracy.

Kirk contacts Sulu on the Excelsior and asks for help. The conference is being held at camp Khitomer on the Klingon/Romulan border. The Enterprise enters the areas and is attacked by the cloaked Bird of Prey. After holding them off, the Excelsior arrives giving Chang another target to attack. Spock has the idea of tracking the ship using the ionized gas that it expels and Uhura suggests targeting it. Spock and McCoy head down to the armory to alter a torpedo.

Kirk and his team arrive in time to prevent the assassination of the Federation president and all of the conspirators are revealed. Admiral Cartwright and the Romulan Ambassador are arrested and Kirk is forgiven by Gorkon’s daughter as the peace talks resume.

Kirk and crew return to the bridge of the Enterprise and are ordered by Starfleet to return to spacedock to be decommissioned.

Both the Enterprise and Excelsior depart as the film ends. 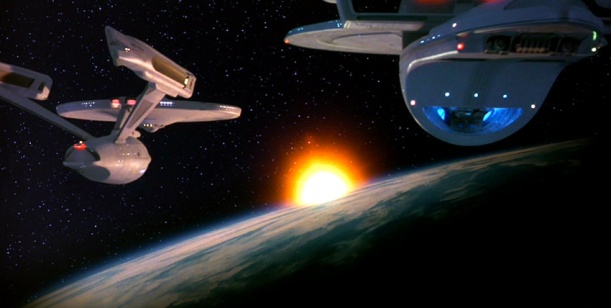 I love this film. I think it’s a fitting end to the series and an appropriate swan song for the crew of the original Enterprise. You can currently find it streaming on Amazon Prime.

“Second star to the right, and straight on til morning.”  – Captain Kirk