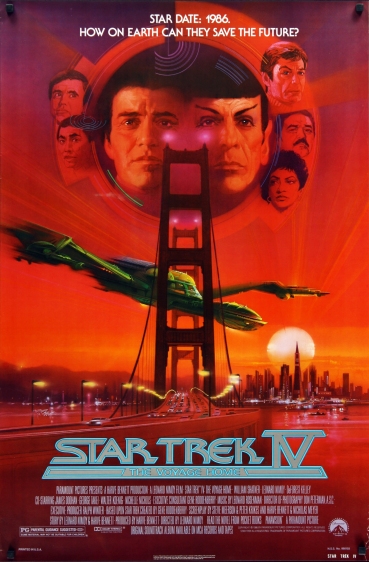 Full disclosure from the offset, this is one of my favorite movies. So if I seem to overly praise this film in my review, that’s why. I don’t hold claim to any authority on the film. I am not a film critic. I do not work in the entertainment industry. I am simply what all of us on this site and podcast are; fans.

I have watched every episode of every star trek series. I have seen every Star Trek film. I have attended fan conventions, wore uniforms and dreamed of the future Gene Roddenberry created. As the third in the death and return of Mr. Spock trilogy of movies, this one takes a radical departure from the conventions of a Star Trek film and frankly, it works. In essence, Star Trek IV: The Voyage Home is the first Star Trek comedy.

Released in 1986, Star Trek IV: The Voyage Home was the second film directed by Mr. Spock himself, Leonard Nimoy and he was given creative freedom to push the boundaries of a conventional Star Trek film and, in my opinion, he delivered. Crafting an entertaining, humorous, environmentally conscious story that was still quintessentially Star Trek was not an easy task and there was always the danger of the drifting into the land of self-parody, but the film manages to hit on all of those marks deftly.

The film takes place immediately after the events of Star Trek III: The Search for Spock. A large cylindrical object is traveling through space on an intercept course for Earth. It’s broadcasting a signal that no ship can translate. As it travels, it drains all of the power from the ships and stations that it passes, rendering them dead in space.

On Earth, the Klingon ambassador is showing to the Federation Council video footage of the destruction of the Enterprise and the deaths of the Klingon crew that boarded it. He demands Kirk be extradited to stand trial for crimes against the Klingon empire. After hearing from the Federation president that Kirk fill face charges of violating Starfleet regulations. Ambassador Sarek arrives to testify on behalf of the accused and the Klingons affirm that there will be no peace between the Federation and the Klingon Empire while Kirk still lives (keep that in mind because it will come back into play in the 6th movie.).

On Vulcan, Kirk and his crew have taken a vote and unanimously agreed to return to earth to face the charges against them. Spock, who is still trying to recover from his death and resurrection, is struggling to reconcile both his Vulcan and human halves. Despite not remembering much during that time, he decides to go back with this shipmates to give testimony. Their stolen Klingon Bird of Prey, newly named the Bounty, departs for Earth.

After finding out about the probe and the effect that it’s having on the electrical systems of any ship coming into contact with it, Kirk and his crew try to determine what it is trying to contact since it took orbit around Earth.

In the 24th century, unfortunately, there are no more humpback whales. Having been hunted to extinction, there is no way for them to communicate with the probe. Kirk decides that the best way for them to get humpback whales is to travel back in time by initiating a warp jump to Warp 10 while slingshotting around the sun. In theory, Warp 10 puts you at all points in time and space at once and the angle that you enter determines when and where you emerge.

The Bounty survives the trip and the crew determines that they have arrived at Earth in the mid 1980’s. They land in Golden Gate park and travel to the city to find out why they were receiving whale song from the middle of the city. They split into teams and what follows are some of the funniest and most endearing moments a Star Trek fan can have.

Sulu, McCoy and Scotty are tasked with converting the cargo bay into a tank. McCoy and Scotty find a company that they can get materials that they need for the whale tank, but the fact that they have no money means that they need to barter for that they need. Scotty, the Chief Engineer, decides to trade the formula for a futuristic polymer called “transparent aluminum” in one of my favorite movie moments. Scotty attempts to use 20th century technology.

Uhura and Chekov are tasked with retrieving the leaking remnants of a nuclear reactor in order to recharge the dilithium crystals used to power the ship. Chekov tries asking around for where they can find the “nuclear wessels”.

Kirk and Spock discover that two humpback whales are in the care of Dr. Gillian Taylor at the Cetacean Institute in Sausalito. After traveling to the institute by bus, in another funny scene,

Kirk and Spock decide that these two whales, who are destined to be set free and then subject to hunting, are the ones that they will take back to the future with them. Spock decides to jump into the tank and mind meld with the whales, leading to this reaction from Kirk while everyone else is watching.

While Kirk and Spock are securing help from Dr. Taylor, Chekov is injured trying to escape and taken to a local hospital, which infuriates McCoy who attributes 20th century medicine to the “Dark Ages”.

Gillian discovers that her whales have been released without her knowledge and she goes to the park to find Kirk. She sees Sulu transferring material from a chopper to the cloaked ship and she is beamed aboard the ship. After rescuing Chekov, the ship searches for the radio frequency they are using to track the whales in the wild. They find them being hunted by a whaling ship. The ship intercepts and the whalers flee.

The whales are then safely brought on board and the ship departs to return to the future.

The Bounty returns to Earth at the point immediately after they left and the ship crash lands into San Francisco harbor. Kirk and the crew escape and Kirk releases the whales, who communicate with the probe. Satisfied, the probe leaves the area, restoring power to the ships and bases that it passed previously.

After successfully saving the planet, the crew faces the consequences of their previous actions. Taking into account the actions the fact that they saved the world, Kirk is reduced in rank to Captain and given the command of a Starship.

I sincerely love this movie and I strongly recommend that you watch it. You will not be disappointed.

The Menu A Fancast Review

The Banshees of Inisherin A Fancast Review