Ships of the Line: My Favorite Sci-Fi Ships.

This sleek, one man fighter is on my list because besides being fully armed and capable, it is immensely maneuverable. Commissioned before the beginning of the first Cylon War, the Viper was designed to be used in conjunction with the Colonial Battlestars. It was used as an all-purpose fighter to defend the Twelve Colonies and remained in service for over twenty years. Even after being surpassed by newer models, the Mark II found itself back in use after Baltar’s software compromised the newer models and gave the Cylons control of them. Armed with 2 forward-firing mass accelerator cannons mounted in the wing roots which contain an 800 round capacity and a 20 round per second fire rate, the Viper is also equipped with a forward-firing missile launcher in the belly which can hold eight rounds and can be equipped with conventional or nuclear missiles under the wings. 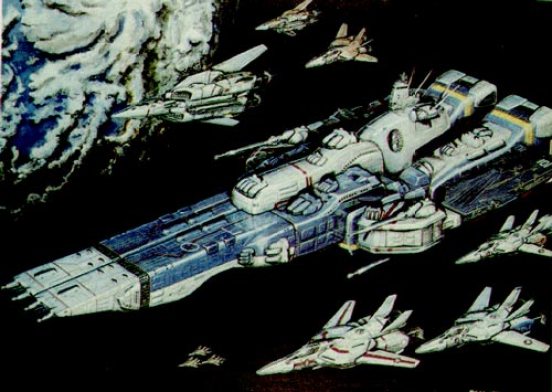 A massive alien spaceship landed on earth in 1999. After humans discovered that it was manned by alien beings ten times larger than humans, the countries of the world discovered that there is a threat beyond earth and it causes them to band together to prepare for a potential invasion. It is the first ship of the “Super Dimension Fortress type” and used its considerable armaments and main cannon to decimate much of the invading Zentradi fleet. It uses a pinpoint barrier system as an external shield against attack with 1 reflex cannon, 8 main particle cannons, 4 single barrel rail cannons, 16 tri-barreled laser turrets, 12 torpedo tubes and 48 ten tube missile launchers. It can carry 200 fighters and additional ships including drop ships and shuttles. It carries over 3,500 crew, 1,500 pilots and over 11,00 troops and that’s not including Macross City located inside the hull which is home to thousands of civilians. 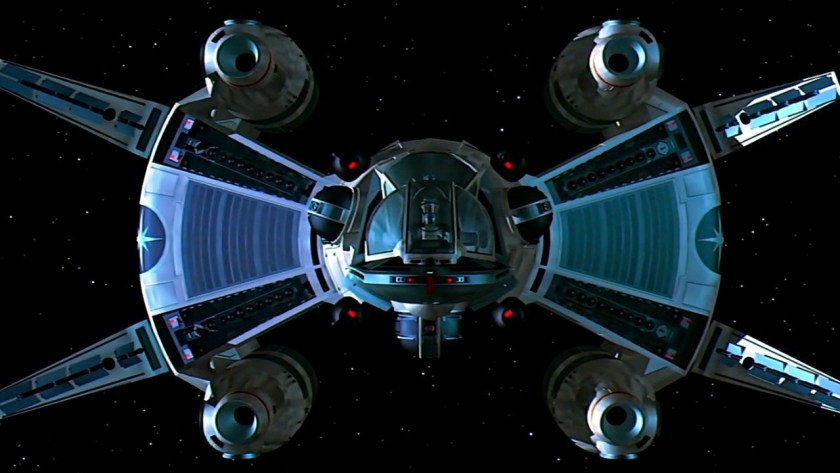 As a child of the 80’s, The Last Starfighter came out in 1984. As a lifelong gamer, the fact that an arcade game is center stage in the action, made me immensely happy as a kid. I always wanted to beat the high score on a game and find out that the world that game simulated was real and that my skills were needed to save the galaxy. I also really loved the Gunstar as a ship. The Gunstar in the film is a prototype which carries 2 people; 1 pilot and 1 navigator. It is the primary fighter deployed by the Star League against the Kodan Armada. It primarily uses lasers, photon bolts and particle beams for attack. The prototype was also equipped with an experimental weapon system called the “Death Blossom” which when surrounded by advancing enemy fighters, placed the Gunstar into a rapidly rotating spin while deploying all weapons at once, in order to destroy multiple ships at once. 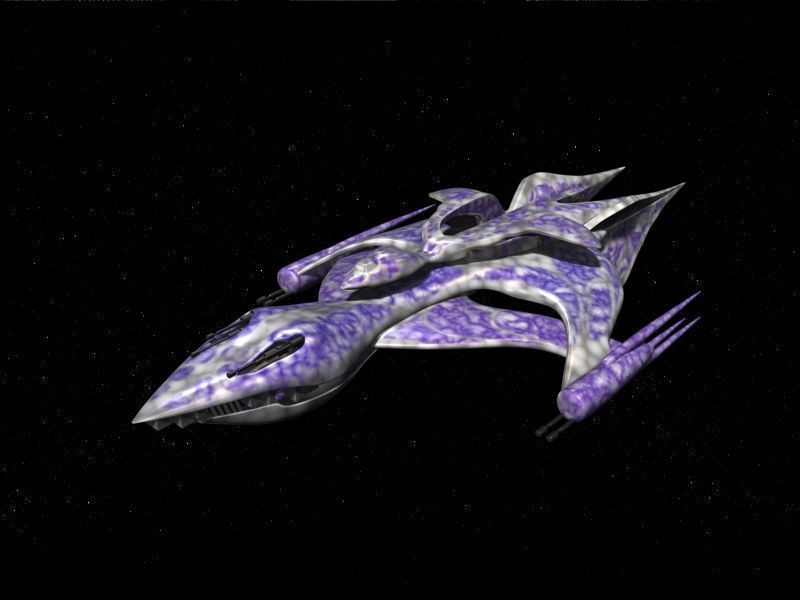 Commissioned in 2259, the first White Star class warship was developed in secret with a mixture of both Minbari and Vorlon technology. Used primarily during the Shadow War, the White Star fleet has a bio-armoured hull which is capable of adapting itself during battle to better protect itself and can heal damage. Beyond their quantum discharge cannons and tertiary fusion cannons, the White Star ships not only carry heavy fighters, but can also create their own jump points into hyperspace without the use of a jumpgate.

Moya is a Leviathan, which is a bio-mechanoid ship created by the ancient builders to move freely amongst the stars. Leviathan’s share a symbiotic relationship with their “Pilots”, creatures from the planet Doien that are linked to the Leviathan internally and help maintain the Leviathan’s inorganic systems. Like many of the worlds in the sector of space inhabited by the Leviathans, the “Pilots” were enslaved by the Peacekeepers to be used to control the Leviathans and use them as transport vehicles. “Pilots” cannot leave their homeworld unless they are bonded to a Leviathan. Moya, like many Leviathans, regards anyone aboard her that is not a threat much the same way many animals in the wild view smaller organisms that either live on them or inside them. Moya regards her crew much like a mother regards its young.  While Moya contains no weapons, she is highly maneuverable, contains defensive shielding and can escape most encounters using a natural countermeasure called “Starburst”, which opens a gateway through space-time that she can escape through. While effective in its execution, the drawback to using “Starburst” is that neither Moya nor Pilot know where they will end up after.

The Normandy is a prototype “deep scout” frigate developed by the alliance for solo reconnaissance missions deep within uncharted regions of space. During the game, you travel on board the Normandy to different locations until you become a Spectre. After that, the ship becomes yours and becomes both your main transportation and base of operations. The ship has three main decks and has its own internal emission sink, which is a stealth system that traps heat internally making the ship invisible on radar. Smaller and more maneuverable that most warships, the Normandy is used in several engagements throughout the game from sneaking past enemy radar to ship-to-ship assaults.

Serenity is a Firefly-class transport ship. It was produced in 2459 and contains stabilizers under the wings which allow for smoother VTOL (Vertical Take Off and Landing) functionality. It is roomier than previous models, allowing for additional quarters and holds two shuttles, one on each side, called Beetles. It uses a Trace Compression Block engine, which is more reliable than its predecessors. Like Moya, Serenity has no offensive weapons but its ability to be stealthy, its smaller size and ability of its crew to escape situations quickly, make the need for weapons on the ship irrelevant. Also, as most of the time the crew is wanted by the Alliance for one crime or another, having offensive weapons would paint an even larger target on their collective backs.

This highly modified Corellian YT-1300 light freighter is “the fastest hunk of junk in the galaxy” and its previous owner Han Solo made several modifications to aid its ability to outrun Imperial Star Destroyers including dual hyperdrive systems, sensor-proof smuggling compartments and dual turret cannons. The Falcon is one of the most famous ships in the galaxy and its reputation is known far and wide to the point of legend.

The USS Defiant (NX-74205) was a prototype vessel designed as an escort vessel to hide its true purpose. Starfleet usually does not design warships due to its charter as an exploratory and peacekeeping organization, but the Defiant was designed to counter the threat of the Borg after the battle of Wolf 359. Benjamin Sisko was integral to its design. The Defiant is considered overgunned and overpowered for a vessel of its size. Its structural integrity field needs to be modified extensively to keep the ship together. It features pulse-phaser cannons and quantum torpedoes with a high-capacity deflector shield system and ablative armor which allows it to take more damage than an average Starfleet vessel even with its shields down. It’s not designed for comfort so there is very limited space, no science labs or holodecks and has a small infirmary. It was designed to fight and win.

The USS Enterprise (NCC-1701 D) is the fifth ship of its name and was launched in 2363 from Utopia Planitia shipyards. It is over 2000 feet long, over 1500 feet wide and weighs over 4 million tons. It’s maximum speed is warp 9.6 and it is armed with 12 phaser arrays and 3 torpedo launchers. The Enterprise is the flagship of the Federation fleet. One of the unique aspects of the Enterprise D is its ability to split the drive section and the saucer section to, in essence, become two ships. The ship is designed to carry a large compliment of crew and civilians and includes sections devoted specifically to research and exploration.

The TARDIS – Doctor Who

TARDIS which stands for Time and Relative Dimension In Space was created by the Time Lords, an alien race to which the pilot of the TARDIS, the Doctor belongs. When properly maintained, the TARDIS can transport its occupant to any point in space and time. It’s supposed to have a functioning chameleon drive, but the current doctor’s TARDIS is stuck in the form of a 1960’s style London police box. As the Doctor says, it is larger on the inside and its full internal size has been ill-defined. There are an unknown number of rooms and corridors and the TARDIS itself has its own personality which can be a little unpredictable at times.

So these are a few of my favorite ships in Science Fiction. Let me know what some of yours are.

‘Black Mirror’ to Return for New Season on Netflix