In the early to mid-eighties on television there was one prevailing sentiment that seemed to run through the bulk of one hour dramas during prime time: people want vehicles. In 1982, NBC launched the highly successful series Knight Rider. The show, about an ex-cop and his souped up talking Pontiac Trans-Am who fight crime, was a huge success. It was such a success that CBS decided to follow suit two years later and launch their own series: Airwolf.

Airwolf, intended to be a spin-off of Magnum P.I., was the story of an advanced military supersonic helicopter that is retrieved from its psychotic creator and his terrorist allies by a former test pilot who uses the newly dubbed “Airwolf” to conduct missions to protect the United States. Airwolf was also a huge success for CBS and the third network was getting a little antsy.

ABC had huge success during this time with sitcoms like Who’s The Boss and Webster, but most of their dramas were skewed more towards an older audience. Dynasty, Moonlighting and The Love Boat were successful shows, but the network was having a hard time capturing viewers on Friday night with NBC running Hunter and Miami Vice back to back against CBS‘s ratings juggernaut Dallas. ABC decided they needed their own vehicle based action series and thus was born: Street Hawk.

Street Hawk followed the formula laid out by Knight Rider and Airwolf. First, you have a guy be an ex something (ex-cop, ex-test pilot). Then you give him a cool name (Stringfellow Hawke, Michael Knight). Then you give him a cool vehicle (K.I.T.T., Airwolf). He has to work outside the law for a shadowy organization (F.L.A.G. The Firm). Finally, you must have a gravely voiced narrator give you a description of the show before, during or after the credits.

Jesse Mach (check) is an ex-motorcycle cop (check) working as a Public Relations officer for the LAPD. He is recruited by a top-secret government agency (check) by federal agent and scientist Norman Tuttle (half check for stereotypical Nerd name scientist sidekick) to ride an all-terrain attack motorcycle designed for urban warfare called Street Hawk (check). 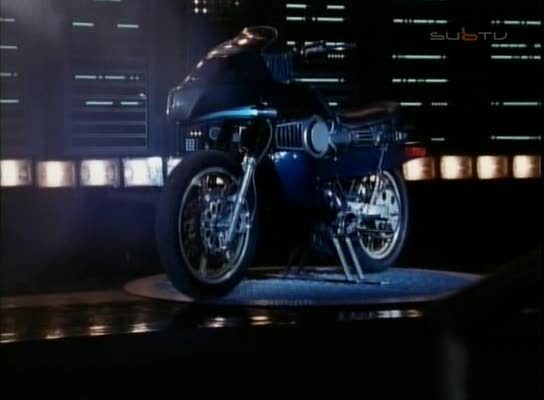 Street Hawk was bulletproof (which is a nebulous distinction at best because it’s a motorcycle), was stocked full of weapons, had advanced computer equipment and could travel at speeds of up to 300 miles per hour thanks to its “hyperthrust” engine (you read that correctly). The show had the formula for success correct. They even had impressive guest stars like Christopher Lloyd and George Clooney. Unfortunately, the show only lasted one season.

Let me know what you thought of Street Hawk. Have you ever watched the show? If so, what did you think?