I am now and have always been a fan of Star Trek. From as far back as I can remember, watching reruns of the classic series with my father, I have been devoted to the world created by Gene Roddenberry. Star Trek: The Next Generation aired in 1987. I was 11 years old when the show had its original run and since then, I have watched the entire series over and over again to the point where I can recall every episode from start to finish.

The last episode of the series aired in 1994 months after I turned 18 and was so immersed in my geekdom, that the end of the series actually made me a little sad. I loved the vision of the future that the show portrayed and I, as a techie, looked forward to the advances in technology.

Star Trek has influenced technology in many ways and both hard science and theoretical sciences have influenced many elements of the show.  One of the theories in Quantum Mechanics that I have always enjoyed learning more about is the Everett Interpretation or the Relative State Formulation. Also known as the many-worlds interpretation, the theory is that there are an infinite number of universes and that every decision and choice that we make or don’t make creates a separate universe.

In Layman’s terms: imagine you are walking along a crowded street on your way to an intersection, avoiding running into several people. You are about to cross the street as the light changes and you begin walking along the cross walk to the other side of the street. You make it to the other side of the street and walk into a restaurant to have lunch with friends. Now imagine if you accidentally ran into someone on the walk to the crosswalk. What if that person you ran into ran into someone else. What if, as you were crossing the street, a bus hit you? What if you made it across the street and the restaurant was closed? What if your friends arrived late? These are all things that we think about on occasion, but the many-worlds theory postulates that all of these events actually occurred in real-time on parallel earths, one for every scenario and every diverging scenario on those earths as well going on an on forever and ever.

This theory forms the basis of the season 7 episode of Star Trek: The Next Generation titled “Parallels”. The episode, written by Brannon Braga and directed by Robert Weimer, originally aired November 29th 1993. The episode begins with Lieutenant Worf (played by Michael Dorn) returning to the Enterprise via shuttlecraft from a bat’leth tournament on the planet Forcas III. He won champion standing and has the trophy to prove it. When he arrives, he is greeted by Commander Riker, who accompanies Worf to his quarters after giving him information about their latest mission, which is to scan a malfunctioning subspace telescope called the Argus Array. Worf seems to be reluctant to return to his quarters because it is his birthday and he is expecting a surprise party, which he does not want. 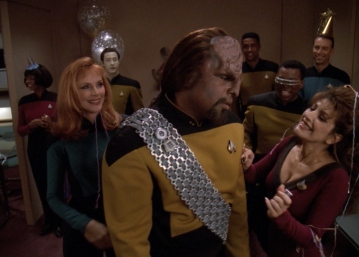 After being surprised with a party, he attempts to have a good time with his shipmates. As he is being handed a piece of chocolate cake, Lieutenant Geordi La Forge enters and comments on the party, Worf begins to feel dizzy and when he recovers, the chocolate cake has become yellow cake. He dismisses the incident.

Worf heads to Ten Forward, the Enterprise bar, where he meets with Counselor Troi. The closeness that Troi shares with Worf’s son has been something that the fierce Klingon is appreciative of and, as a single father, he decides to make Troi his Soh-Chim which is the equivalent of surrogate mother. In case anything happens to Worf, Troi would have custody of Alexander. While Troi is flattered, Worf equates it to being his stepsister.

After leaving Troi, he travels to Engineering where they discover that the Cardassians have been using the array to spy on the Federation. Captain Picard orders Worf to scan for Cardassian ships in the area and as Geordi hands Worf a data PADD, he begins to feel dizzy again and when he recovers everyone has changed position and the Captain is gone. He decides to go to sickbay.

Dr. Crusher scans him and determines that he is feeling the effects of a concussion from being hit in the head during the bat’leth tournament, resulting in his being awarded 9th place. Shocked, Worf returns to his quarters and sees that the trophy has changed to a smaller one. Believing that he is the victim of a trick, he goes to his log, which confirms that he did lose the tournament showing the smaller trophy. Other crew members arrive to check on Worf, who is becoming agitated at all of the changes. Worf blacks out and recovers again to more changes. Troi’s hair and clothes have changed, the painting on the wall has changed and Geordi takes his arm to calm him. Worf gets dizzy again and suddenly he is on the bridge during a red alert. He doesn’t recognize the control panel and fails to raise the shields as the ship is attacked by Cardassians. The ship is damaged and the Captain orders a retreat as the Cardassians destroy the array.

After the battle, the Captain contacts Geordi in engineering, but he is told that Geordi has been taken to sickbay with severe injuries. Worf is relieved of duty and returns to his quarters where there are more changes. He checks his logs and finds out that he never went to the tournament and that his brother went instead to represent the family. Troi walks in and starts to massage his shoulders, which he finds strange and when she tries to kiss him, he jumps up surprised and then finds out that he and Troi are married. He goes to engineering to talk to Data and finds out that he and the counselor have been married for two years and their relationship began after his spinal injury (which happened a season previously). 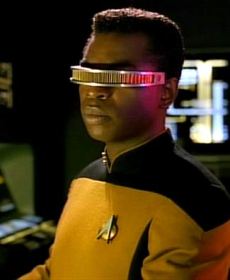 Worf realizes that every time that he has experienced dizziness and a change in the world, he was in the presence of Geordi. He decides to go to sickbay to see him. Geordi has died from his injuries. When Data examines Geordi’s visor, Worf gets dizzy again and when he recovers, he is wearing a different uniform and is the First Officer of the Enterprise. Data determines that Worf is in a state of Quantum flux. He goes to see Captain Riker, who doesn’t understand why Worf can’t remember that Captain Picard was killed by the Borg and that he is married. After scanning the path Worf took back to the Enterprise, Lieutenant Crusher determines that there is a quantum fissure that Worf passed through and Geordi’s visor, which resonates on a quantum level has been pushing him from one universe to another.

The Enterprise moves into position in front of the fissure, which they determine to be a fixed point in time (Dr. Who fans know what I’m talking about). While scanning the anomaly, they see that there are several scans being done on the same point by multiple Enterprises from multiple universes. They attempt to scan for Worf’s reality, which once he returns to will reset all the universes back to normal. An energy surge causes the anomoly to start shifting Enterprises into the same reality, showing us a glimpse of the different realities caused by the Everett Interpretation.

After altering the shuttle, Worf departs the Enterprise to fly into the fissure when he is attacked by another Enterprise. This Enterprise opens its communication channel, they see that the alternate ship that attacked is falling apart and the Captain Riker in that universe is one of the only ships left after the Borg wiped out the Federation. He and his crew are desperate to not have to return to almost certain death and continue firing on Worf’s shuttle.

Riker attempts to disable the other ship, but it was so damaged that it explodes. Worf enters the fissure and initiates an inverse warp field, which pushes him back into his own reality to the point in time that was the beginning of the episode.

Worf explains what happened when he returns to the Enterprise. He won the tournament and Troi surprises him on his birthday by not allowing the Commander to throw a surprise party. He asks her to stay for dinner and she agrees.

Now I know the episode resolved on a seemingly simple happy ending, but the science that’s discussed satisfies me as a science and Star Trek fan. Check this episode out. I am relatively sure that you can find the entire series streaming somewhere.