First Batman and The Flash thrilled readers with “The Button” storyline. Now a new story takes readers closer to the world of The Watchmen with a new Superman story.

Titled “Doomsday Clock”, a call back to one of the plot points of The Watchmen series, DC Entertainment CCO Geoff Johns and artist Gary Frank are bringing a new story that will have DC Comic’s greatest hero possibly facing off against one of comics most powerful beings: Doctor Manhattan. Fans of the DC Comics: Rebirth series of stories have been hinting at possible ties to the Watchmen since it’s inception and frankly, since the end of The New 52. Will Doomsday Clock answer some of those open questions? 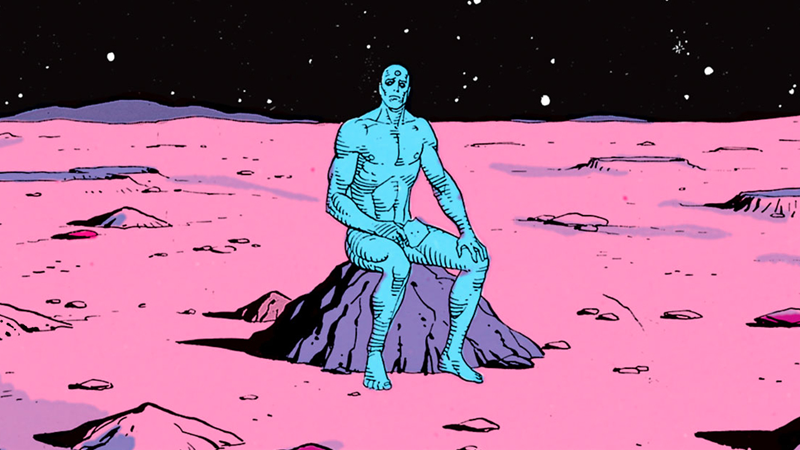 Johns stated recently that some of those questions will be answered in this story. In an interview with SyfyWire, Johns admits, “It is Watchmen colliding with the DC Universe.” He goes on to state that, “It is the most personal and most epic, utterly mind-bending project I have ever worked on in my career. With [DC Universe: Rebirth], I opened the door to [Watchmen‘s Doctor] Manhattan. Part of that was I loved the real-world influence Watchmen has. I put Manhattan out there, and always thought there was a Manhattan/Superman story to be told, but then … it grew. And grew. It took my heart and soul over. Still, at the core of it, there’s a being who has lost his humanity, and distanced himself from it, and an alien who embodies humanity more than most humans. I love the idea that Watchmen influenced DC, but what would that look like in reverse? And it goes well beyond that.”

Although “The Button” seems to be the most direct tie-in so far to the collision of the DC Universe and the world of Watchmen, Johns is stating that Doomsday Clock is a standalone story. It will not have any tie-ins or crossovers. It is not, in his words, “a publishing event”. We shall have to wait and see if the events of DC Comics next big event Dark Nights: Metal will connect in some way to the events that lead up to Doomsday Clock and its relationship to Superman.

Let me know what you think. What is your theory on the story of Doomsday Clock? What would you like to see from a connecting story between Superman and the Watchmen? Comments are welcome below.