Did the Latest Episode of Westworld Confirm A Fan Theory?

After last weeks reveal about Bernard, his relationship to Ford and the death of Theresa, many viewers began to speculate on what might come next. This inaugural season of Westworld has been highly successful for HBO, bringing in over 11 million viewers per episode. This fan following has led to rampant speculation online about the characters and storyline of the show itself. From the timeline the show takes place in to who is actually real in the world, fans have thrown out theories online that have people as enthralled as they are with HBO‘s other monster hit Game of Thrones.

One of the prevailing theories about the show is that the character of the mysterious Man in Black, played by Ed Harris is actually an older version of the character William, played by Jimmi Simpson. This theory also feeds into fan speculation that the show we are watching is showing two different time periods. As we all have busy lives, I won’t bore you with minutia, but I will give a few facts that bolster this theory.

When we’re first introduced to William and his future brother-in-law Logan, they’re getting ready to enter the park. William chooses his outfit and is helped during the setup process by a lovely host named Angela. Angela explains the park and its rules and even offers herself to him, which he politely declines. 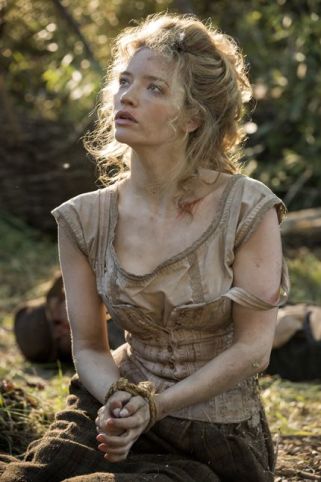 Man in Black and Angela

In Sunday’s episode, The Man in Black and Teddy are getting closer to Wyatt. They come upon a woman tied up and scared and the Man in Black notes that it is Angela. He even says to her “I thought they would have retired you, but Ford really likes a pretty face.” This would bolster the notion that “William” remembers Angela from his first visit to the park, but also that there is a time difference because if both storylines exist simultaneously, then why would Angela be retired?

William has become more and more attracted to and protective of host Dolores, even giving in to his feelings for her. He has been on her journey, seeing the world of Westworld through her eyes and learning about the maze from her as they move deeper into the outer territories. 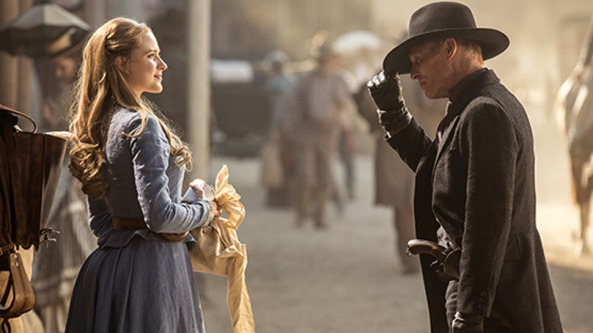 Man in Black and Dolores

From the first episode, the Man in Black has insinuated himself into Dolores and Teddy’s storyline. He’s made a point of reminding Teddy that they’ve been doing this for a long time and that Teddy is designed to lose as he drags Dolores into the barn to finish her off. He asks her on more than one occasion if she remembers him, which actually disappoints him when he realizes that she doesn’t. If this were just another story to the Man in Black, he wouldn’t spend so much time using Dolores as a catalyst for the search for the maze. This bolsters the theory that ‘William’ is trying to jog her memories of their initial journey in the maze.

William had no real interest in going to Westworld. He was convinced by his soon to be brother-in-law Logan to go. Logan gave into every one of his desires while in the park and when William decides to indulge in a storyline with Dolores, Logan decides that they should be bad guys and go “black hat”. William continues to resist giving in and is reassured by Dolores, who continues to be compassionate throughout their time together. Logan continues to berate William for not really living in this environment, a move which has repercussions for them both. William then decides to leave Logan behind when he’s captured, taking his first turn to the darkness that’s seemingly bubbling under the surface.

The Man in Black tells the story of his life outside the park to both Angela and Teddy when he’s tied up. He tells how his wife killed herself after learning about what he did at Westworld. After finding out why, the Man in Black decides to return to Westworld to see if he can do something “truly evil”. In other words, he returns to the park to go “black hat”. After killing Maeve and her daughter, he notices that Maeve refuses to die and even tries to defend herself, prompting him to realize that there is another game being played in the park: Arnold’s Game.

What do you think? The show has so many twists and turns that keep viewers engaged that you may have your own theories that you want to share. Let us know in the comments below or follow us on Twitter @superpoweredfan.

Story Brought to you via The Super Powered Fancast.