Star Trek II: The Wrath of Khan : A Fancast Review

In honor of the 50th Anniversary of Star Trek, I have decided to watch every Star Trek film in order and review them honestly. As a fan, I admit that I can be a bit of a fanboy in both my praise of these movies and of my condemnation of people who decry them. I will attempt to hold back my snark, but I cannot guarantee it. To that end, this film is actually one of my favorites.

In order to properly inform you about the significance of this film, you need to know that it is one of the first films in the franchise that requires you to know about one of the episodes of the series. The reason why Khan is so wrathful is due to his previous history with Kirk and his crew and that happens in the episode “Space Seed”.

Space Seed was the 22nd episode of the first season of Star Trek and aired in 1967. In the episode, the Enterprise finds the derelict ship SS Botany Bay and after beaming over to the ship, they discover 72 cryogenically frozen people who have been in stasis for over 200 years. After reviving the leader, the crew discovers that they have revived Khan Noonien Singh, a genetically altered human from the 20th century who conquered a third of the earth with his followers before being defeated.

After being revived, Khan attempts to take over the ship by reviving his crew and using their genetically enhanced strength. Kirk manages to find a way to gas them collectively and knock them out, but Khan escapes and what follows is a classic Star Trek fight.

After beating Khan unconscious with a plastic rod, Kirk then decides to maroon Khan and his people on an uninhabited jungle planet called Ceti Alpha v. Keep this in mind because all of this comes into play in the movie made 15 years later.

Star Trek II: The Wrath of Khan begins with the iconic Kobayashi Maru training mission. The ship is commanded by helmsman Lt. Saavik. 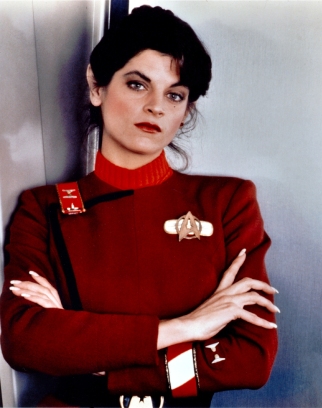 For the uninitiated, the Kobayashi Maru mission is designed to teach aspiring officers how to deal with a no-win scenario. No one has ever won that mission with the exception of James T. Kirk. Saavik fails as expected as Kirk oversees the training of new officers from Earth with Spock as captain of the Enterprise.

The USS Reliant has been dispatched to search for a lifeless planet to test the Genesis Device, a projectile designed to reorganize matter to create life. If successful, the device would create habitable planets for colonization, but if modified, could be used to destroy all life on a given planet. Thinking that they are beaming down to Ceti Alpha VI, Captain Terrell and Commander Chekov begin to scan for faint life readings that can be moved off world.

After discovering the Botany Bay, Chekov tells Terrell that they need to leave quickly. Why they don’t just call the ship and have themselves beamed aboard makes no sense to me, but they don’t and are soon discovered by……..

Apparently, months after being marooned on Ceti Alpha V, the sister planet Ceti Alpha VI exploded, shifting the orbit of the planet that Khan and his people were on, killing most of them and destroying 99% of its indigenous life. As Kirk and his crew moved on with their lives, no one ever checked on their progress,  giving Khan  a right to be a little pissed in my opinion. What comes next is a scene that still disturbs me to this day and was a little hard-core for a Star Trek film. Khan implants Chekov and Terrell with an eel that makes them susceptible to suggestion in order to get information out of them.

After taking over the Reliant and banishing its crew to Ceti Alpha V, Khan attempts to steal the Genesis device and its information in order to lure Kirk into a confrontation. The Genesis station is run by one of Kirk’s former girlfriends Dr. Carol Marcus and the son that they share Dr. David Marcus.

The Enterprise replies to a distress call from Carol and they are ambushed by the Reliant and left crippled. As the Reliant calls for the surrender of the Enterprise, Khan reveals himself.

Kirk and Spock prepare to surrender and turn over the Genesis files, but as they make the preparations, they secretly find the access codes for the Reliant and remotely shut down its shields, giving them time to counter attack. Both ships crippled, the Reliant withdraws and Enterprise makes it to Regula I where they find Carol and David in a pocket of the nearby moon converted to a habitable area.

After making what repairs they can, Khan steals the Genesis device and maroons Kirk on the moon, leading to one of the best scenes in cinema history.

After being rescued by Spock, the ship hides in a nearby nebula, being pursued by Khan and the Reliant. The advantage to Enterprise is that in the nebula, Reliant’s sensors and shields are useless. The danger is that the Enterprise’s systems are affected the same way.

Eventually, the Enterprise presses the advantage that they find and manage to seriously cripple the Reliant and severely injure Khan, killing his crew. Khan decides to activate the Genesis device in order to destroy himself and Kirk. The Enterprise attempts to leave the nebula, but they are so severely damaged, that the warp drive is down, leading Spock to make a fateful decision.

With the ship saved at the last-minute and, once again, Kirk not having to face his own death, Kirk notices that amongst the relief, Spock is gone. Spock repaired the warp core, sacrificing himself in the process by infecting himself with radiation poisoning. What follows is a scene that made me cry as a child and still chokes me up now. If it doesn’t affect you in some way, you might not be human.

There you have it. Star Trek II: The Wrath of Khan still continues to be one of my favorite films. It starts and ends with action, pathos and excitement and I recommend you watch it.

The Empty Man A Fancast Review