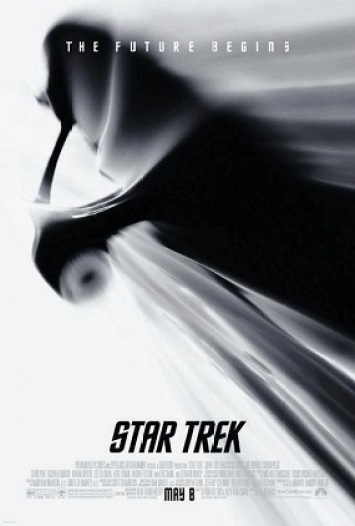 After Star Trek: Nemesis failed at the box office, it was widely considered the death knell of the franchise. After the cancellation of the final Star Trek show on television Star Trek: Enterprise, many people believed that Star Trek had reached the end of its lifespan. It took another seven years, but Star Trek managed to find its way back to the big screen.

Simply titled Star Trek, this new film is both a prequel and a jumping off point for a new interpretation of the Star Trek universe.

In the 23rd century, the USS Kelvin is sent to investigate a lightning storm in space.

A large ship emerges from the storm and attacks the Kelvin,crippling it. The ship is Romulan, called the Narada. The first officer of the Narada demands that the captain of the Kelvin travel to his ship to negotiate. The Captain agrees and leaves his first officer George Kirk in charge of the ship. Kirk is monitoring the Captain’s life signs as he travels to the Narada. He is asked by the Narada’s captain  Nero about the current stardate and whether or not he knows Ambassador Spock. When the Kelvin’s captain seems confused and Nero murders him.

The Narada resumes firing on the Kelvin and Kirk orders all hands to abandon ship. His pregnant wife is on board and goes into labor as they escape. George Kirk listens to the birth over the comm system as he positions the Kelvin between the escaping crew and the Narada. He names his newborn son James Tiberius Kirk and sets a collision course for the Kelvin to ram the Narada. The auto-pilot functions are down and Kirk has to guide the ship in manually. George Kirk sacrifices himself to save the crew and his son and the Narada is left drifting in space.

Back Story: Brilliance of this opening scene aside, the movie makes the equally brilliant decision to lean into the science of the narrative. In the Star Trek universe that produced the shows that I watched and the movies that I went to all stream from a specific timeline. The timeline that I am used to stems from the USS Kelvin completing its mission, Kirk being born and then being raised by his parents on Earth. With the introduction of the Narada and the destruction of the Kelvin, the timeline permanently changes and an “alternate reality” is established. The timeline that I remember continues to exist, but this timeline allows for multiple changes in the stories and characters that fans had been used to.

Years later Kirk is a reckless kid in Iowa living with his stepfather who is a jerk, because all stepfathers are jerks in the movies. For some reason he decides to take his stepfathers vintage car, blast some Beastie Boys (23rd century BTW) and drive the car off of a cliff. Spock is being bullied on Vulcan, which is just weird to watch. The movie then jumps again in time to Spock being accepted into the Vulcan Science Academy and rejecting the offer when his human mother is insulted. He then joins Starfleet against the wishes of his father Sarek.

Kirk apparently likes to aimlessly ride a motorcycle and get into bar fights with people who are trying to make something of themselves. So, in this alternate universe, James Kirk is a douche. After being beaten up in a bar fight while trying to hit on Uhura, he is confronted by Captain Christopher Pike.

Back Story: Captain Christopher Pike was the original Captain of the Enterprise in the pilot episode “The Cage”. He was replaced by William Shatner because the studio liked Shatner more.

Pike convinces Kirk that he should want more from his life and tells him that he should join Starfleet. Kirk is bitter because “Starfleet killed my daddy”, I guess but it doesn’t stop him from joining the next day. Kirk vows to graduate in three years, but he keep being beaten by the Kobayashi Maru.

We get to see Kirk beat the test and Spock is intrigued because he created the test. He brings Kirk before a disciplinary committee and before they render a decision on Kirk’s argument, there is a distress call from Vulcan.

Personal Note: This is the point in the film where things become annoyingly convenient. I can forgive the lens flares everyone complained about. Those were a style choice, but the convenient plot details are an example of spotty screenwriting.

Everyone begins to separate and go to their perspective ships, which is the first thing that I find strange. There is an entire Starfleet and a Federation in this time period. Why are the only ships that can respond located in Earth orbit and crewed by trainees? Why is there no mention of the Vulcan fleet? Kirk is not allowed to be a part of the mission since he is facing possible expulsion from the Academy, but McCoy somehow sneaks him aboard the Enterprise by having him fake an illness. Why wouldn’t the dock master simply prevent both men from boarding, call for another doctor and leave McCoy on Earth to treat his “patient”?

Apparently, even though the mission that killed George Kirk is well-known, according to Pike, no one takes the time to review the “lightning storm in space” description as something to compare other than Kirk. So everyone departs for Vulcan. When the Enterprise arrives, the entire fleet is decimated. The Narada is drilling into the planet’s core. Also, at no point during this does anyone on the surface decide to try to escape. The Narada attacks the Enterprise, forcing Pike to surrender and go to the Narada. Also, even though he is under formal review, Pike makes Kirk his first officer, effectively leaving him in charge.

Kirk, Sulu and another officer halo jump from orbit to the drilling platform, destroying it but not before Nero drops a particle of red matter into the core, causing a black hole to appear inside the planet. Spock attempts to rescue his parents and the rest of the Vulcan council, but his mother dies.

Vulcan is destroyed and Nero leaves with Pike.

Kirk and Spock disagree with the next course of action (Kirk wants to rescue Pike and Spock wants to rendezvous with the rest of the fleet and plan a counter attack.) and Spock knocks out Kirk and maroons him on an adjacent ice planet. Next we are introduced to convenient plot point: Original Spock.

Spock rescues Kirk and explains to him that he is from the future. He mind melds with Kirk and Kirk learns that a supernova threatened to destroy Romulus. Spock used the red matter to try to create a black hole to swallow the sun itself to protect the planet. A plan that makes little to no sense even as I write it. Romulus was destroyed, killing Nero’s family and Spock’s ship and the Narada were thrown back in time. Nero stranded Spock on the planet and took the remaining red matter. He wanted Spock to witness the destruction of his planet.

Kirk and older Spock reach a Federation outpost on the planet and, conveniently, find Engineer Montgomery Scott. Scotty has been assigned to the station after one of his transporter experiments lost Admiral Archer’s beagle. They enlist Scotty’s help and he, conveniently, has been developing a new technology called Transwarp Beaming that can beam them onto the Enterprise even at warp. Now we’ve established that the Enterprise has left the system, so if this technology works, as it has to in order to move along the plot, than Scotty has just rendered the rest of the movie moot and the need for travel by ship irrelevant at the same time. If he has developed technology that transports people light years away, across solar systems and onto craft traveling faster than light, then why do they even need starships anymore?

Be that as it may, Kirk and Scotty beam aboard the Enterprise and make their way to the bridge where Kirk takes older Spock’s advice and compromises younger Spock’s emotions by making him angry. Spock steps down and Kirk takes over the ship. The Narada is headed to Earth and Kirk hides the Enterprise in the gas clouds of Titan. Nero has been torturing Pike for access to the Earth defense codes. This makes little sense as well consider no ship has been able to stop the Narada. What kind of planetary defenses was Nero expecting? Spock offers to help and the two men beam over to the Narada when it passes.

They rescue Pike and young Spock takes older Spock’s ship to destroy the drill. Nero follows Spock away from the planet and the Enterprise appears and attacks the Narada as Spock rams older Spock’s ship into the Narada, igniting the red matter aboard and creating a black hole. Spock and Kirk appear on the bridge of the Enterprise and offer to help Nero. He refuses and the Narada is pulled into the black hole and destroyed.

Kirk is, conveniently, promoted to Captain and given command of the Enterprise. Pike is promoted to Admiral and Spock is assigned to the Enterprise as first officer. Spock runs into his older self and is given the advice to stay in Starfleet and do what feels right rather than blindly following logic.

Kirk saunters his way onto the bridge and the ship sets out on its five-year mission.

Now, mild snark aside, the film is highly watchable and very entertaining. Most of the issues I have with it stem from the plot choices and how unbelievably unlikable they have made Kirk. Other than that and the conveniences of the plot, it is worth watching.

The Menu A Fancast Review

The Banshees of Inisherin A Fancast Review