In the Pale Moonlight : A Fancast Recap

How far would any of us be willing to go for the sake of what we believe is right?

How willing are you to compromise your personal principles for the sake of the greater good?

What if compromising those principles injures you personally, but saves billions of lives?

These are tough questions to answer and believe me, there is nothing heavy about this article. This is a fan based website and our only goal is to pay fan service to the things that we are fans of. So don’t expect political discourse or comparisons to real world scenarios from the articles on this site. It is strictly for entertainment.

One of my favorite episodes of the series Star Trek: Deep Space Nine, which aired from 1993 to 1999 is called “In The Pale Moonlight”. This episode is darker in tone than many of the episodes of Star Trek across all of the series and even many of the movies. While most of the Star Trek mythos relies on the optimistic view of the future, Deep Space Nine dealt with some of the more morally ambiguous aspects of living in a utopian future society, especially some of the decisions and compromises necessary to make that society function. The reason why this episode appeals to me is because the main character Captain Benjamin Sisko has to make a decision that is in the greater good for the galaxy, but at the expense of his own morality.

So at this point in the show, the Federation and it’s allies are at war with the Dominion, a government from the Gamma quadrant who enslaves worlds to bring order to the galaxy. The Dominion don’t risk their own troops in battle, they breed genetically enhanced soldiers called the Jem’Hadar, who they keep supplied with a drug called ketracel white which keeps them loyal and allows the Jem’Hadar to be ruthless soldiers without need of sleep or food.

The Dominion has invaded the Alpha Quadrant and allied themselves with the Cardassians, forcing the Klingons out of their territory. Both the Federation and the Klingon Empire are on the defensive all over the quadrant and are losing ship after ship to Dominion attacks across the Neutral Zone that the Federation shares with the Romulans. The Romulans have a non aggression pact with the Dominion, which keeps them safe from attack.

The episode begins with Captain Sisko sitting in his quarters, recording to his personal log. The episode is told in flashback from Sisko’s point of view with references back to him for reactions to the events that we just saw in the episode. Sisko is upset as he sits with members of his senior staff discussing the updated casualty lists that he has just posted. At this point, there is no one in Starfleet and especially on Deep Space Nine who doesn’t know someone who has either been killed in action or is missing and presumed dead. 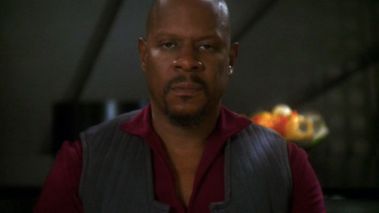 The only way Sisko can see a way forward is to try to convince the Romulans that the Dominion’s desire for order will one day push them to conquer the Romulan empire and with all other opposition defeated, the Romulans will be surrounded. He needs the Romulans to declare war against the Dominion. The final push that sets Sisko on this path is the Dominion invasion of Betazed in Federation territory, which threatens the Vulcans, the Andorians and the Talorians.

Sisko goes to the one person on the station who can get information from the Cardassian home planet, a “tailor” and former spy master named Elim Garak. Garak is willing to help, even though it will require calling in all of his favors with people on Cardassia Prime. When Sisko returns to Garak for a progress report, he finds that every person that Garak talked to on his home planet was murdered by the Jem’Hadar within one day of speaking with him. This spurs Garak into action, specifically into convincing the Romulan senator who wrote the non aggression treaty with the Dominion, Vreenak, that the Dominion is planning to invade Romulus. All he needs is for Captain Sisko to invite Senator Vreenak to a secret meeting on Deep Space Nine while he is on his way to another meeting with the Dominion on Sukara. 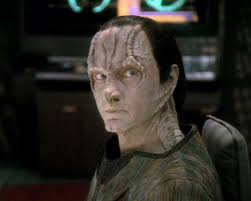 Garak tells Sisko that he can obtain a recording of a meeting that lays out the invasion plans. When Sisko is skeptical, Garak tells him that he needs to contact the Klingons to release a criminal awaiting a death sentence who is going to forge the message on a Cardassian data rod that can only be recorded onto once and cannot be altered in order to prove its authenticity. After the forger is brought to the station, he assaults the bar owner Quark and Sisko is forced to bribe Quark in order to keep the forger from being arrested. Sisko contemplates stopping the entire operation until he gets back to his quarters and finds a new set of casualty reports.

The next day, Garak tells him that in order to get the data rod that they need, the person in possession of the rod needs 200 liters of a regulated substance called Bio-Mimetic Gel which can be used for genetic experimentation or chemical weapons. Sisko calls off the deal and then changes his mind, offering 85 liters instead. Doctor Bashir, the Chief Medical Officer, objects and requests the order in writing while telling Sisko that his objection will be noted in his log. After securing the rod, the forger completes the simulated recording of the leaders of the Cardassian government and the Dominion planning the invasion of the Romulan empire.

Vreenak alters course to meet with Sisko secretly on the station, where Sisko plans to show him the data rod in order to convince him to go back to his government and pressure them into declaring war against the Dominion. Sisko starts to feel better about his actions after receiving the blessing of Starfleet Command and he prepares for the arrival of the Senator. Garak tells Sisko that while he is speaking with the senator, Garak will sneak onto the senator’s ship and see if he can find any information about the Dominion on board.

After viewing the recording and asking to examine it himself, Sisko is put into the position of waiting to see if the forgery was a success. When Sisko returns to the senator, he is confronted with the forgery and is assured by the senator that the entire quadrant will know about his actions. Sisko fears that this will push the Romulans to openly support the Dominion and begin attacking the Federation itself. While he awaits the consequences of his actions, two days later he receives news that Vreenak’s ship was destroyed after his meeting on Sukara and everyone on board was killed.

Sisko violently confronts Garak, who explains to Sisko that while he hoped the recording would work, he sabotaged Senator Vreenak’s ship and murdered the forger because the investigation of the explosion will show that the ship was sabotaged and a damaged, but still retrievable data rod with  a recording of a planned Dominion invasion was still on board. Garak informs him that any imperfections in the recording will be seen as a result of the damage from the explosion and that the Dominion will only look more guilty when they try to deny it. Garak tells Sisko that the Romulans will enter the war and that all it cost him was one senator, one criminal and the self-respect of one Starfleet Officer.

Sisko concludes his log by relaying that the Romulans have entered the war and have struck fifteen Dominion targets along their border. There is a celebration planned on the station to welcome their new allies. He talks about banners being made to welcome them to the war, but he isn’t happy. He doesn’t particularly feel better about this turn in the war. He says to camera “I lied. I cheated. I bribed men to cover the crimes of other men. I am an accessory to murder. But the most damning thing of all is that I think I can live with it.” He continues to tell himself that he can live with it and the episode ends with him erasing the entire log.

Sisko’s attempts to convince himself that he is doing the wrong things for the right reasons give this episode a reverence that not many other Star Trek episodes have. I enjoyed the fact that this episode didn’t need explosions or battles to convey suspense and the acting was top-notch by Avery Brooks as Sisko and Andrew Robinson as Garak. This episode and the season 4 episode “The Visitor” are my favorite episodes of the entire series.