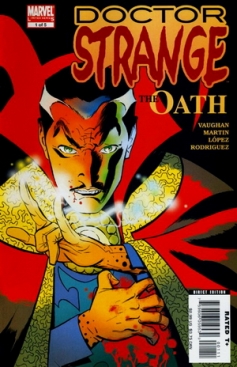 Concluding our countdown of my favorite Doctor Strange story arcs is one I’ve reviewed before on this site, but still remains relevant to the character of Doctor Stephen Strange both as the Sorcerer Supreme, but also as the Doctor that he trained to be.

The Oath was written by Y: The Last Man creator Brian K. Vaughn with art by Marcos Martin. It was originally published in December 2006.

The reason why I liked revisiting this story is because it touches on so many elements of the Marvel Cinematic and Television universes that we are currently experiencing. On a rainy night in New York, Iron Fist is waiting to be treated by the Night Nurse when Wong bursts through the doors carrying Doctor Strange, who has been shot. Strange takes to his astral form to direct his treatment and investigate who shot him and why. The investigation leads to revelations about Stephen’s past, a mystical elixir that can cure all disease and the fact that Wong is dying.

The Oath in the story has a double meaning as Stephen must decide whether to honor his oath to the Ancient One to protect the world from magical influence or the Hippocratic Oath he took as a physician to “first, do no harm”. His final decision is controversial, but it also shows the depths of the character in how he makes that decision regardless of the consequences.