Many horror movies and thrillers have a moment when the protagonist turns to a member of the clergy for help. These holy men are seen as harbingers of salvation there to give guidance and protection. The trailer for the movie Brimstone seeks to turns that trope on its head. 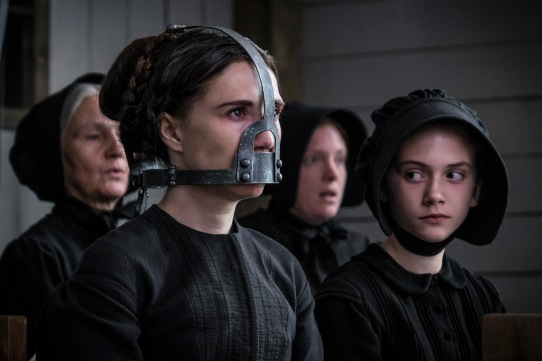 The movie looks like a western thriller with a twist of horror. Written and directed by Martin Koolhoven (Winter in Wartime), the film is about a young pioneer woman named Liz, played by Dakota Fanning (Very Good Girls). Liz is mute and living in the town with her young daughter. When a mysterious man comes to town known only as “The Preacher”, played by Guy Pierce (Ravenous), Liz finds herself on the run from her past and a crime she didn’t commit. With The Preacher relentlessly hunting her throughout the west, Liz must do whatever she can to protect herself and her daughter.

Guy Pierce is truly menacing every moment he’s on the screen. He is able to convey a kind of quiet fury that makes every interaction he has with Liz more intense. Her inability to speak makes her situation more precarious. The film also stars Game of Thrones alums Kit Harrington and Carice Van Outen. Brimstone looks like an interesting thriller set in an environment that is both lush and foreboding.

Let us know what you think. Is Brimstone a movie that you would check out?

Brimstone comes to theaters in March 2017

Phineas and Ferb The Movie: Candace Against the Universe gets Premiere Date on Disney+